New Orleans-based photographer David Knox (see image above) is opening a show of work from his Tableaux Montage portfolio on June 14th, 2017, at the Buckhead Branch of the Atlanta Public Library, at 269 Buckhead Avenue, N.E., in Atlanta, GA 30305.

This show is called Ritual and Ruin: Tableaux of a Lost War, and will be up at the Buckhead Library through Monday, July 17th, 2017.

Knox's images in this show are large in scale, up to six feet wide, or more. 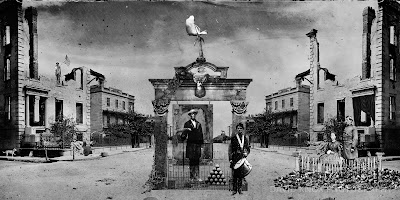 According to the folks at the Buckhead Library, Knox attempts, in these images, to evoke the "ghosts of past centuries [that] find undisturbed refuge in the American South from the foothills of the Appalachian Mountains down to the fertile flat lands of the Gulf Coast."

The folks in Atlanta go on: "For New Orleans-based photographer David Knox, the past resides in the present in many forms - land, crops, architecture, and people. 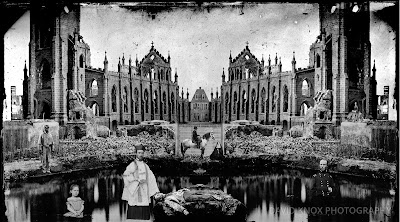 "In his most recent body of work, he combines historical images from the American Civil War with his own photographs to create photomontages depicting an imagined, surreal world set somewhere in the mid-19th century South.

"These tableaux weave together the disparate lives of Union and Confederate soldiers of the Civil War, freedmen and slaves, civilians and clergy.

"These tableaux weave together the disparate lives of Union and Confederate soldiers, slaves, women, children, clergy, and animals. 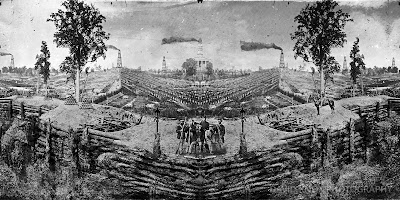 "The characters in these fabled scenes and the symbols around them offer fictional narratives that represent and explore hardship, loss, survival, gender, race, class, religion, death, and resurrection.

"The pervasiveness of Christianity in the South combined with the apocalyptical wartime destruction of the landscape provide reference for many of the titles, based on verses from the Book of Revelation. 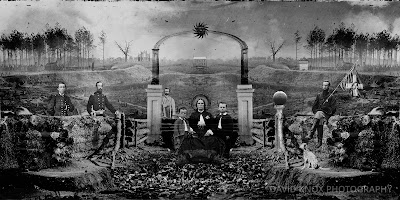 Given the scale of Knox's prints, they have vastly more power when seen in person than they have in the small scale images I can show here.

The challenge of photography is of course always time, since the straightforward shot records moments and lifts them out of time.

That's one reason lots of photographers like to photograph abandoned factories and falling-down houses -- one gets a sense of the passage of time into the image, since the present moment of the object reveals at least something of what it used to look like as well as the way it looks now.

But such images are inherently elegiac, are about loss and decay, and the ravages of time.

Knox builds on that quality in his work, and in the process addresses directly the American South's legacy of exploitation and violence, that quality of the South that Joan Didion tries to capture when she says that Southerners dwell in a memory-haunted landscape which we believe we have "bloodied . . . with history."

Powerful work here, well worth a trip to Buckhead, and to the Library.