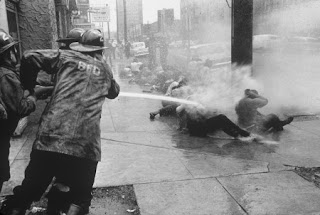 Alabama native and influential photographer Charles Moore has died at the age of 79. Moore repeatedly risked his own personal safety to capture powerful B&W images of the struggle for racial justice in the South in the 1960s. His work is widely credited with bringing the injustices of Southern society to the attention of the nation, mobilizing support for the passage of landmark Civil Rights laws.

Posted by John N. Wall/Photographer at 2:18 PM No comments: 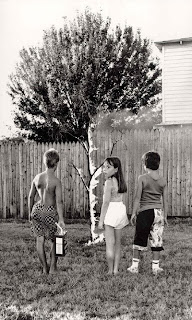 Also, Chris Sims, based in Durham, NC -- see below for his Baum Prize -- has work in the Discoveries of the Meeting Place show. Atlanta-based Michael Schmelling and New Orleans-based Craig Mammano have work in the Whatever Was Splendid show at Vine Street Studios, 1113 Vine Street, Houston.

Even though Foto/Fest is in the South, the largest number of photographers on exhibition this year seem to come from elsewhere. There is even an entire show devoted to photographers from Southern California. This is different from other photography festivals in the South, notably Atlanta Celebrates Photography, which balances national and international work with a strong local/regional presence.

I guess this is a sign of the broader perspective taken toward photography in Texas. Or, more likely, Texans believe Texas is the center of the universe.

There are, of course, all the customary festival events like portfolio reviews, forums, workshops, and the like. If you are in Houston, check it out and let me know what you found.

Posted by John N. Wall/Photographer at 12:52 PM No comments: 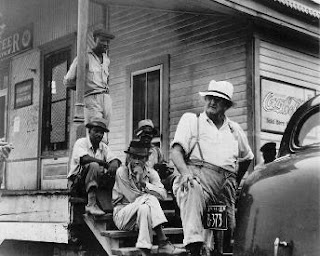 While we are on the subject of non-Southern photographers working in the South, there are two new books out on Dorothea Lange, a California-based photographer most famous for the Migrant Mother image who worked in the South for a number of years while employed by Roy Stryker and the FSA.

The books are Dorothea Lange: A Life Beyond Limits, by Linda Gordon (Norton) and Daring to Look: Dorothea Lange's Photographs and Reports from the Field, by Anne Whiston Spirn  (Chicago).

Elaine Showalter has a detailed and thoughtful review of both titles in the Times Literary Supplement for February 19. She finds that these books are more about Lange as artist and woman than they are about the world she documented.

The images speak to Lange's perceptiveness about the people she photographed as well as to her skill as a photographer. In images like the one above (Plantation Overseer and His Field Hands, near Clarksdale. Mississippi), Lange gets the look, texture, and character of relationships in the rural South just right.

Posted by John N. Wall/Photographer at 8:54 AM No comments: 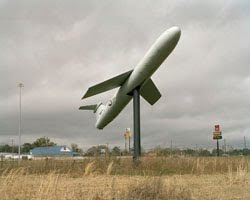 Minneapolis photographer Paul Shambroom has a show of work at Foto/Fest in Houston, opening this week, about how we use discarded weapons as memorials to those who died in foreign wars.

The body of work is called Shrines, and you can see more of it here. He finds these sites all over, but the majority of the images in this series so far were made in places like Centerville, Georgia; Anderson, South Carolina; and Buford, Georgia.

Don't you love the South? I can get so depressed.

Posted by John N. Wall/Photographer at 2:18 PM No comments: 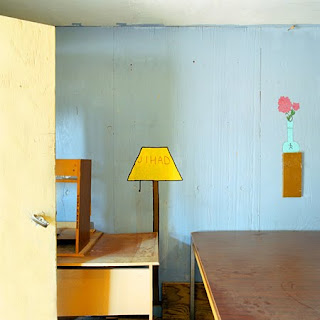 Southern photographer Christopher Sims is having a year to remember. Already, he has been short-listed by Photo Lucida's Critical Mass process and selected for a show at Foto/Fest 2010 in Houston. Now, he has been chosen as this year's recipient of the prestigious Baum Award for Emerging American Photographers, which includes $10, 000 and a solo exhibition at SF Camerawork, opening in San Francisco on May 6, 2010.

The Baum Award is given each year to an emerging artist working in photography who in the view of the jury deserves support and wider recognition. The award is administered by SF Camerawork, which receives nominations from art curators across the country. Chris was one of 50 artists whose work was considered by this year's jury, which included Bruce Hainley, Artforum, Los Angeles; Erin O'Toole, department of photography, SFMOMA; and Jack von Euw, The Bancroft Library Pictorial Collection, UC Berkeley.

Chris won the award on the basis of his portfolio Theater of War: The Pretend Villages of Iraq and Afghanistan, first exhibited in 2008 at UNC's Center for the Study of the American South, in Chapel Hill, NC. Since then, the work has been exhibited at the Houston Center for Photography, the Griffin Museum of Photography, the Light Factory, and the Halsey Institute of Contemporary Art.

Chris has an eye for the strange within the ordinary, and is a master of powerful understatement. One of his portfolios documents the prison camp at Guantanamo Bay, in Cuba. Here, this center of controversy about our treatment of prisoners accused of terrorism is represented by a series of images of parking lots, swimming pools, and meeting rooms, devoid of any of the participants -- either prisoners or guards or interrogators -- who make this more than any ordinary, even banal, American suburban landscape.

Chris' winning body of work for the Baum competition comments on war by documenting the curious way in which the US government prepares American solders for fighting in the Middle East by recreating foreign communities on American soil. These are really low-budget operations so there is precious little "foreignness" to the sites, yet they certainly do not look American. Chris's uncanny juxtaposition of the odd and the ordinary foregrounds the fake, the artificial, and the surreal within American culture.

One might see in this vision of America a southern perspective, one that operates both in and out of an American identity, aware of being a part of all this, yet distant, able to adopt a position that questions while it records what it puts before us. Chris says in an interview that sometimes he participates in the mock war games, taking the role of a photojournalist, hence embodying in his practice an inside/outside stance, accepting pretense while exposing it.

Congratulations to Chris. He does deep work. He is certainly a Southern Photographer to Watch Out For.
Posted by John N. Wall/Photographer at 1:28 PM 1 comment: