Leah Sobsey in Local Histories: The Ground We Walk On in Chapel Hill 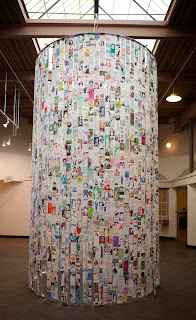 Chapel Hill-based photographer Leah Sobsey, together with her collaborator Lynn Bregman Blass, has work from their Visual History Project in a group multimedia show opening this weekend in Chapel Hill's new community gallery space. The show is entitled Local Histories: The Ground We Walk On, and it's up through April 29th, 2011 at 523 East Franklin Street, in Chapel Hill.  The show opens with a reception this Friday, February 11th, from 5-9 pm.

The show involves the work of over 50 artists employing a wide range of media including performance, videos,  installations, and multi-media pieces, as well as the more traditional forms in art is expressed, that is, drawings, sculptures, paintings, and photographs. All these folks and all these methods of making art are in the service of an idea about process, the process of "exploring Alfredo Jaar’s idea that 'place cannot be global,'” so the work in this show "addresses issues of histories and institutions of communities, family, place; commemorative responses; heroes; folklore and buried truths; traditions; memory/nostalgia; longing/loss; progress/development; the intersection of the local and global, and social, legal, political events as they pertain to, influence and construct local histories."
I'm featuring this show for a couple of reasons. One is that Sobsey is a first-class photographer, one of the Southern Photographers We Watch Out For, who makes hauntingly beautiful images while she is engaging in thoughtful and complex projects that never fail to enhance our perception of the world around us. She shows exceptional range in her work, from documentary work that involves its subjects in the production of their own images to straightforward images characterized by wit and ingenuity to alternative process work that reminds us of the ways the act of photography transforms our perception of the world.

The second reason is that Sobsey's work in this show uses photography as a means to larger goals, rather than making the act of photography an end in itself. She says that the piece she and Blass collaborated on for this show is the result of a process that includes community engagement as well as aesthetic exploration. According to Sobsey, she and Blass started this project with conversations about technique, about the relationship between qualities of photography and the qualities of encaustic, an ancient artistic medium involving beeswax & damar resin, first used in Fayum mummy portraits in Egypt in 100-300 AD.
Sobsey says, "Each medium uses the idea of time in similar yet disparate ways: Photography as a way of bringing the moment to bear – an ephemeral way of remembering; encaustic, through its translucency, allowing the viewer to look back through a painting’s layers and see how each moment, each stroke, informs the present. We became interested in how these two different processes could be joined together to speak to the idea of time."
Considering time and art, they wound up looking backward into their own pasts, at memorabilia once treasured but now forgotten. They also looked outward, as they exhibited work that examined their visual histories they enabled others to tell their own stories. This led to their engagement with the Chapel Hill and Carrboro communities around personal narratives that led to Our Stories in Focus, a touring community art project that tells the collective stories of 500 people. Their piece in the Chapel Hill show is a visual realization of their awareness that art has the power to weave individuals, cultures and communities together.
So, here's my take on this. Photography as traditionally practiced is often a solitary discipline, leading to an image matted and framed and hanging on the wall. Sobsey's photography, at least in this project, is now an enabler of a communitarian project, a way of evoking responses and engaging large numbers of people in that quintessentially Southern practice of story telling. This activity then then gets organized into a three-dimensional expression hanging in a space in Chapel Hill, 8 feet in diameter and 15 feet high, composed of one hundred strips with over 1000 images hand transferred and dipped through encaustic medium forming an object that occupies lots of space and invites us to engage with it actively, walking around it, working out how it embodies time and story.

So here photography in the South takes a powerful new turn, at the service of both artistic and social goals -- definitely worth a look!

Posted by John N. Wall/Photographer at 10:57 AM