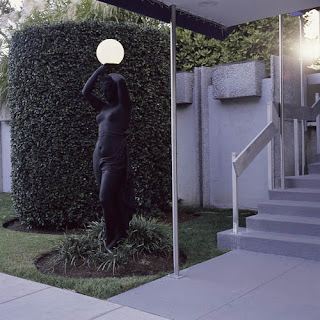 Andy McMillan, a Charlotte, NC-based photographer, has work in a show at the Civilian Art Projects at  1019 7th Street NW, in Washington, DC.

Civilian Art Projects is a neat gallery space that features clever, challenging shows, often including photography. A recent show at the gallery featured Durham-based photographer Chris Sims, on his way to winning this year's Baum Award for Emerging Photographers.

The show with Andy's work is based on the Exquisite Corpse method, which as they describe it, "involves a group of collaborators assembling a collection of images – each collaborator adds to a composition in sequence, either by following a rule or by being allowed to see only the end of what the previous person has contributed."

The show at Civilian Art  now includes 28 photographers and three sets of images, each of which, as they say,  "present both recognizable connections and surprising juxtapositions, and illustrate the responsive, dreamlike aesthetic that makes the exquisite corpse methodology so exquisite."

Images from the show are on the Civilian Art website. Andy  also has a bunch of great work on his own website. He's definitely a Southern Photographer to Watch Out For.