Jan Banning, Down and Out in the South 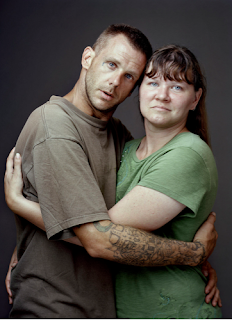 The Dutch photographer Jan Banning was artist-in-residence at the 701 Center for Contemporary Art in Columbia, South Carolina, in 2010.

While in residence, he developed a portfolio of portraits of homeless people in Columbia, and also in Atlanta and in the Mississippi Delta.

CNN has picked up images from this portfolio and has them for view on their CNN Photos blog, here.

In an interview with CNN’s Cody McCloy, Banning says that meeting with some homeless people led him to think about his work as a photographer in terms of making visible those whom society regards as invisible.

Banning made these images with a medium format camera in a studio and with a full array of lights, to crate a strong sense of intimacy with his subjects.

He shot the portraits using a Fuji GX680, a physically large medium format camera that makes a statement in and of itself.

“This is something monumental,” he says. “So I want to get away from this association with the neighbor with a camera. This is more like making a statue. That’s the atmosphere I want to create.

“For me a portrait is, first of all, an encounter between two people. Forget about the camera, forget about subject, these are two people and they have to somehow relate.”

This approach gives us images that reveal the dignity of Banning’s subjects, the basic humanity that they share with everyone regardless of our station in life.

Banning says, “What it boils down to is the question of labeling. Are you concentrating on what makes other people different from you, or do you find yourself in these people, in these faces. Are they more familiar than you might want to admit?

“Seeing a homeless person is somehow scratching our conscience,” Banning says. “I think we all hope to live in a world where people don’t have to be homeless. And seeing them confronts us with our own failure to organize our society in a just way.”

Definitely strong work here, powerful images that overcome distance and difference to remind us of our common humanity.

For his respectful engagement with  the least of these, our Southern brothers and sisters, Jan Banning is an Honorary Southern Photographer.