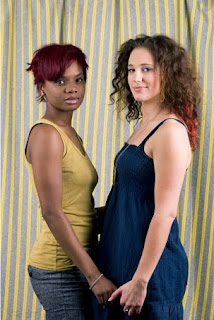 Atlanta photographer Karen Shacham has a show of her work up now through August 27th in the Dewberry Gallery of the Savannah College of Art and Design in its Atlanta campus, at 1545 Peachtree Street.

This is Karen's MFA show, and it includes a large number of photographs done in traditional family portrait style of gay, lesbian, and transgendered couples. The backgrounds of many of these images are so ordinary that one suspects Karen borrowed them from the Olan Mills Studio at the Mall in Peachtree City.

But this sense of the ordinary is part of what Karen is about here, in the age of growing social comfort with same-sex relationships and the acceptance of gay marriage. Karen says in her project statement that it is the "love between these people [that] is the overarching symbol" in her photographs, not their being of the same gender.

Several of the couples shown in Karen's work are of different races, a fact that gives this body of work an extra dimension of interest regarding the exploration of sameness and difference in the realm of desire.

Both this dimension of Karen's work, AND the fact that she doesn't mention it in her account of her work serve as reminders of how different the South of today is from the South of my youth. After all, mixed race marriages were only made legal in the South through a Supreme Court decision handed down in 1967.